Satsuki is a 17 Year old Japanese highschool student that got summoned to another world as a Hero, She descended in Galwark Kingdom and sheltered by the kingdom, though at first she refused to act as hero, she later agreed to do it as long as the kingdom agreed in helping her find a way for her to return home

Satsuki has a good appearance, matching her Honor student persona, she has dark magenta long hair that often tied in a single ponytail using big indigo ribbon, a big and round, thistle colorod eyes, and a body proportion that nobody can complaint.

She donned a silverish white feminine armor in her upper torso, with a short indigo skirt, a dark tight up to her tigh, showing a splendid "Absolute Territory", and a metal Greaves matching her armor.

Although coming from an elite family, Satsuki have a warm and caring personality, she's friendly to anybody, a positive person that bring a joyful atmosphere around her, though sometimes she goes overboard and become quite an annoying and meddlesome older girl, she act as the big sister in her group where she lead, she loves to pester and forcing people she like into an embarrassing situation just for her amusement.

At the first 3 month after the summoning, Satsuki is quite depressed and lost her positivity, she spent her time locked inside her own room, but is afraid of wasting time and grow old there, Satsuki stand up again, agreed to become the Hero for the kingdom as long the kingdom helped her finds a way to return back home, dealing with all the noble that trying to currying her favor aiming for her authority and knowing that the kingdom in reality want her to stay, Satsuki become quite cold and cautious.

After Reuniting with Ayase Miharu and the "Middle School" Sendou Siblings with the help of Haruto Amakawa, Satsuki gradually regained her brightness and cheerfulness.

In later time, Satsuki starting to display an open and girly attitude whenever Haruto are around, Something that totally surprised anyone that knows her for a long time.

Satsuki is the daughter of the CEO of a big conglomerate group in Japan, the Sumeragi Group, She comes from an elite family and grow up to not embarrass her family name, Excellent on the both academic and out in the field, an Honor student through and through

In middle school she joined Student council, she also met Miharu in middle school, and in later years, both of them work together as part of the student council, through Miharu, she got acquainted with the Sendou Siblings, She join the Student council again in Highschool, on the Entrance Ceremony of her 2nd year, she's was a guiding a new student who is lost to the venue and there she met Amakawa Haruto who was there staring at the name list of student of the class.

After School, Satsuki was about to go back home together with Miharu and the Sendou Siblings, when a magical circle suddenly pop out around her and throw her to another world.

Amakawa Haruto
At the beginning, Satsuki is quite cautious toward Rio, From time to time again, there are men that approaching her aiming at her title, and Rio's way on approaching her are even more ridiculous, but when she realize that he was testing her if she can be trusted, she found him more trustworthy than the other men already.

Satsuki hates the new world, it suddenly and forcefully took everything away from her, stranding her in a completely strange land, the food is not good, no bath, no freedom, until Rio came and break everything, he gave her Japanese foods, a bath, her friend, he showed her the beauty of that world.

When she know his history, she got awed with him even more, he definitely already part of that world, yet at the same time he was torn inside, with his value of previous world confronting the nature of the world, satsuki find him a really kind person.

For Satsuki, Rio are her hero.

Ayase Miharu
Satsuki are Miharu senior since middle school, both of them are on Student council, though their relationship start pretty stiff, they keep getting closer with Satsuki in the end also joining the group of childhood friend with Takahisa, after the summoning, they got even more closer.

Sendou Takahisa
Satsuki and Takahisa relationship are a complete senpai-kouhai relationship, and also more of the friend of my friend type of relationship through Miharu, though since middle school, they often travel around as one group.

Rui Shigekura
Rui are the son of a rival corporation of Satsuki conglomerate family, they know each other from the social gathering that they often need to join following their family business since childhood.

As a hero, Satsuki has an amazing amount of Mana and the strength of all her magic get buffed, Satsuki also has a divine weapon as a sign of her hero status in the shape of a short spear, matching her ability in wielding Naginata back when she's still in Japan

Satsuki and the Galwark party ladies

Satsuki and Her group in school

Satsuki in the hero summit 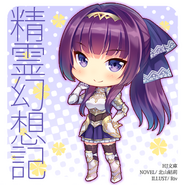 Satsuki_CB
Add a photo to this gallery
Retrieved from "https://seirei-gensouki.fandom.com/wiki/Sumeragi_Satsuki?oldid=1492"
Community content is available under CC-BY-SA unless otherwise noted.